This last shoot in this series is located at 4 Mile Point, part of Scenic Hudson’s conservation project. It’s a modest parcel of land but has nice river access. While taking all these photos of the ice floes, it occurred to me that the barrenness of the landscape is reminiscent of the desert landscape. I thought it would be interesting to explore this idea a bit.

One aspect of the desert motif is the blinding and unrelenting sun overhead. Coupled with an endless barren landscape, the isolation can be awe-inspiring.

Another element of the desert motif that reinforces the feeling of isolation and solitude is the lone tree. Here’s my take. 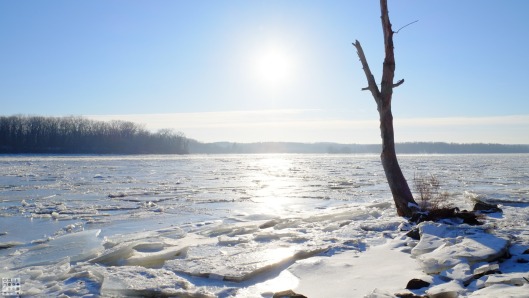 Perhaps there was life here once, but now…

The cargo ship as freight train

Just as the railroads cut through these barren places, the cargo ships along the Hudson can be imagined serving a similar purpose. To the right is the same ship from earlier. Clearly these ships cannot move particularly fast as they cut through the ice.

While standing on the ice, I took a video of the barge and tug breaking up the ice. I love the sound of the ice cracking and breaking. It’s not like a glacier calving, which sounds like a gunshot. This is more of a long, resonant vibration, like a whip cracking in slow motion. As the ship pushed the ice to the side, you could hear the sound of the crack moving through the ice. It was a bit exhilarating, particularly since I was standing on the ice, and the crack was heading towards me!

Studies of bark, ice, and moss

Wrapping up these pictures, I present a mini study of the trees along the bank. What’s fascinating is that every possible ice formation can be found along the bank, from large sheets, to thin, crystalline patterns, to icicles, to perfectly formed crystal-clear blocks.

I guess as the tide pushes up the ice, some of it gets lodged in strange places, like in exposed tree roots. Here you can also see some dormant moss, waiting for a dash of liquid moisture to rejuvenate. 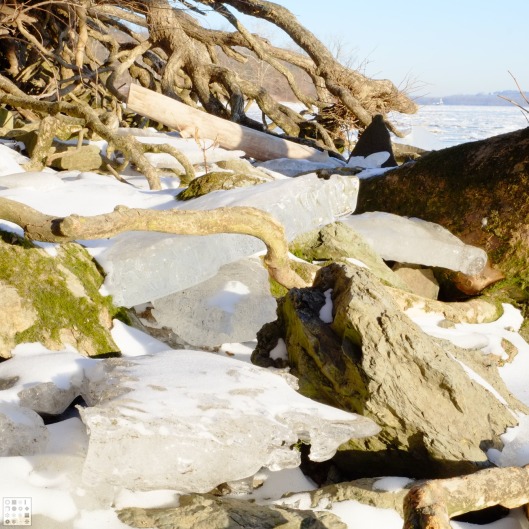 If I recall, this is a particular species of maple tree that has the multi-colored peeling bark. I love the texture and juxtaposition with the ice.