These pictures are from the Rip Van Winkle Bridge, which connects two of the most prominent artists from the 19th Century Hudson River School. This shot is facing southeast looking at the Catksills. To the east (west of frame) is Olana, the Persian inspired mansion of Frederic Church. His mentor and founder of the Hudson River School is Thomas Cole, whose more modest home, Cedar Grove, is to the right, on the west side of the Hudson. These early American painters considered the beauty of the Hudson “as a special gift from God” and were awed by the “‘divine architecture’ they beheld in the mountains, hollows, and waters of the valley” [1].

While the Catskills are certainly not the most majestic nor awe-inspiring mountains, their grandeur is in the composition and lighting that makes this area truly remarkable. When I took these shots I already had taken numerous photos, but as I looked back, the colors had gotten even more intense, so I decided it was worth freezing fingers for a bit longer to get an even better crop of colors. 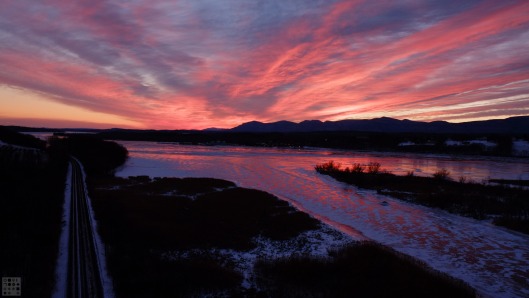 These two pictures are of an orchard with the sunset providing a backdrop.

Power lines in the distance. The sunset pretty much covered the whole sky.

Here’s a wider angle shot with the part of the bridge in view. As it got later, the sky looked like a nebula in some distant galaxy.