A friend requested some night shots of Singapore, and I was happy to oblige. The edge of downtown is Marina Bay, where the ridiculous Marina Bay Sands hotel overlooks the bay and the central business district. Once the sun sets, the city lights up one-by-one. From the bridges, to the tour boats, to the trees, everything is lit up in festive colors. These pictures attempt to convey a bit of that festivity.

This first picture is of the hotel and the Science Museum. To the left is a stage being built for Singapore’s 50th Anniversary celebration. 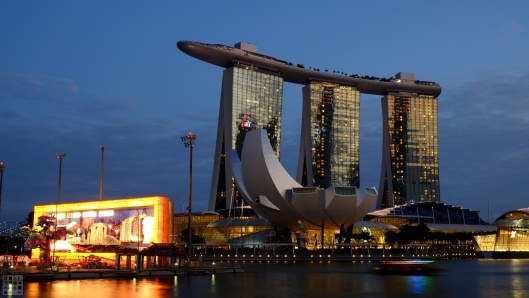 This picture looks the other way and captures the heart of the business district at dusk.

The two nights I was down here, there was a light show projected from the top of the Sands. I kept waiting for the bat symbol to appear, but alas, this isn’t Gotham.

The harbor cruise boats were fully lit with neon, which painted the water in numerous unnatural colors.

If anyone else has requests for pictures, feel free to mention them in the comments. I’m always up for new subjects, and I “aim” to please.